The lighting projector lenses series “L”* (*smooth light), as well as the D series lenses, together with the special material REVO-01, are used in systems with light sources such as Led C.O.B.(acronym of “Chip on board” or multiple Led) or power Led.

In this particular series of lenses the convex surface is “rough”, i.e. is not shiny. This feature of the lenses confers to the projected light more homogeneity and eliminates chromatic aberrations that are normally in it.

With the use of the “L” lenses series the light becomes soft and smooth however guaranteeing the achievement of very closed projection angles. These lenses are used in outdoor applications such as summer gardens, tennis / padel courts or inside restaurants and conference rooms or still find applications in spotlights for shop windows or to illuminate art objects.

They are currently available in four different diameters: 30mm, 45mm, 55mm and 70mm: 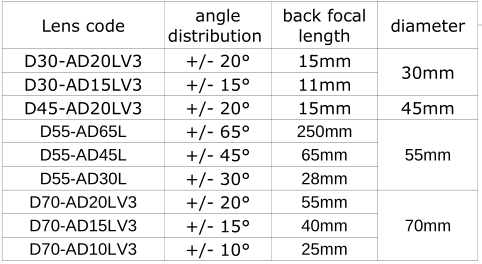 We at IODA SRL can determine the degree of “roughness” (or depth of “scratch”) of the lenses “L” series’ surfaces thanks to a system we developed called A.C.S. (Controlled Surface Abrasion).

The value of A.C.S. is expressed in microns (1 μm = 1/1000 Millimeter (0.001 mm): the higher the value, the deeper the scratch will be and, consequently, the more noticeable the light scattering effect will be. In the production of custom lenses, this parameter can also be customized in order to obtain the best lens for each single application.

Thanks to the production line called  Free Form we at IODA SRL can produce aspherical lenses according to special customer’s request in diameters between 15 and 180mm.