IODA has created aspherical semi finished lenses, having a negative and positive power, which are suitable for wrap frames.

The special shape of convex allows to create lenses with thin edge thickness. In this way the comfort for the user is improved , while the convex surface inclination of the perpendicular pupil position is decreased.

The base for VEGA2 semi finished lens is described with two numbers: the former one is for the base on the optic field, the latter one identifies the base on the edge; as you can see from the drawing aside, there is a slope zone (this zone is different for each base) between the two bases.

The range of Vega2 semi finished lens is very wide and allow us to work the concave surface with an ampler radius, if it is compared with a 8 base; this is another important factor both increasing the optical quality and making lighter the lenses having thinner edges.

Vega2 semi finished lenses are made in diameter 75 mm, the distance between optic and geometric point is 7.5 mm, so that the creation of finished lenses for very big frames is possible.

Using Wega2 semi-finished lenses and the free-form production technology, you can realize the best solution for wrap lenses.

Semi finished lenses are available in the folloing types:

Some information about the lens construction from semi finished Vega2

Our semi finished “Vega2” lens shows a particular curve on the convex surface, which is very innovative, because of its usage for wrap frame lenses.

To obtain the best results, this particular form requires a special attention during the preliminary production stages, before working the S/F, especially in reference to the prism.

The S/F is produced with the optical center placed at 7 mm from the geometric center, to satisfy the request for wrap frame lenses even for very big glasses. 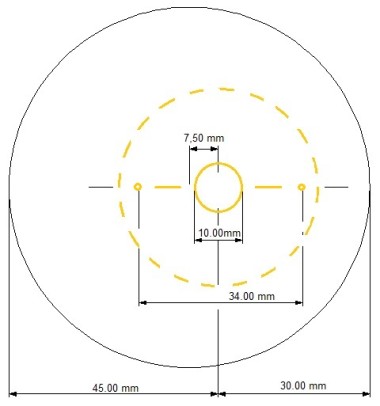 Considering that the particular geometry of the convex surface does not permit to make the normal calculations in reference to the prism, you have to use one of the following methods:

A) Blocking the S/F at the optic center (clearly visible on the S/F).
In this case there are no problems blocking the S/F on the working holder, because the holder lies on a centred surface with spherical symmetry; being on a normal semifinished lens and since the optical field is centred authomatically, the finished lens will be without any prism.

B) Blocking the S/F at the geometric center and using the attached table to set up the value of the prism for the centring.
In this case, there is neither more symmetry nor similar phenomenom as the one of the progressive semifinished lens taking place: in fact, a precise contact between the holder and the S/F is missing.
In order to avoid any unwanted result from this sitution, you need to use always the same blocking technique.
We suggest you should make the holder coincide with the temple part of the S/F and use the holder with high diameter: 70/75 mm.
Since they are not centred, you will have to introduce a centring prism, whose value is indicated in the attached table.
In the convex surface, there are two semi-visible marks: these round marks indicate the optic zone position.